I live in the municipal of Sodankylä (since 2006), which is located in Finnish Lapland. The municipal is large in area but small in terms of population. The two official languages of Sodankylä are Finnish and Northern Sami. It’s extreme northern location means short summers and long, cold winters. For a knitter, that’s kind of ideal.

The coat of arms of Sodankylä is really cool. I like the colours black, silver and red and the very graphic design. It’s said to symbolise the Lappish wilderness. The black means the long, dark polar nights and the red flames are from a type of open fire, where the fire burns in a crack between two large logs. Because of the star (which can be seen during the dark long nights in the winter), Sodankylä is called the star municipal of Lapland.

I wanted to turn this cool design into mittens. 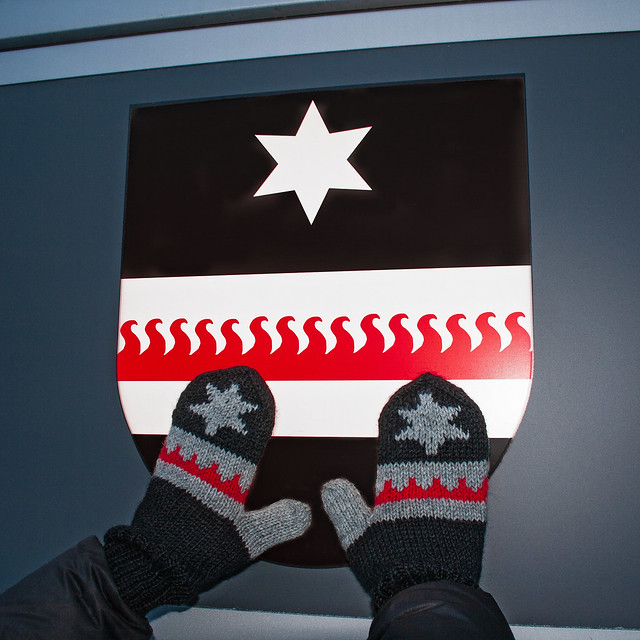 I stylised the camp fire by knitting it without the squiggle. 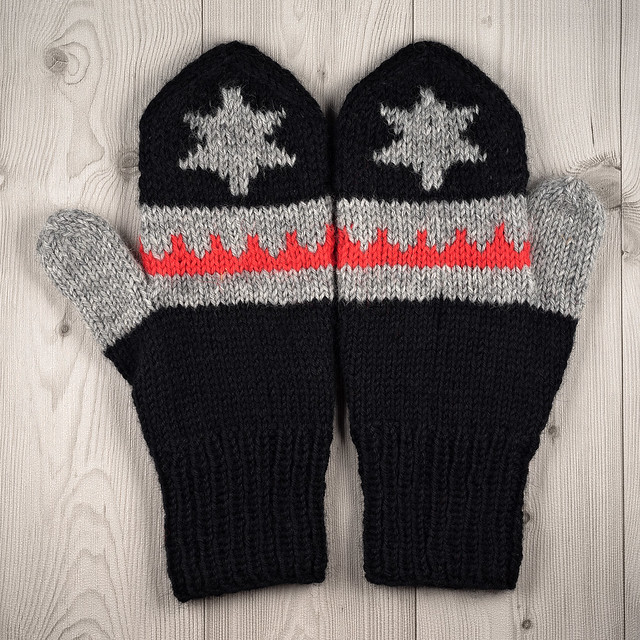 On the palm side I knitted a dotted starry night pattern – I thought that would be appropriate.

I used Novita 7 Veljestä yarn, which is nice and fairly thick, so it makes warm mittens. 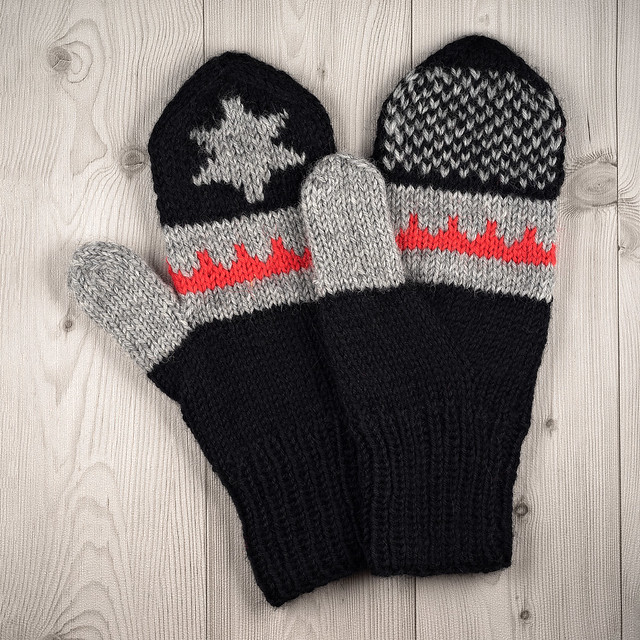 This last picture was taken in the middle of the day. Around the polar night time (in December), daytime is short and very blue. I like using my ski poles for photo props. 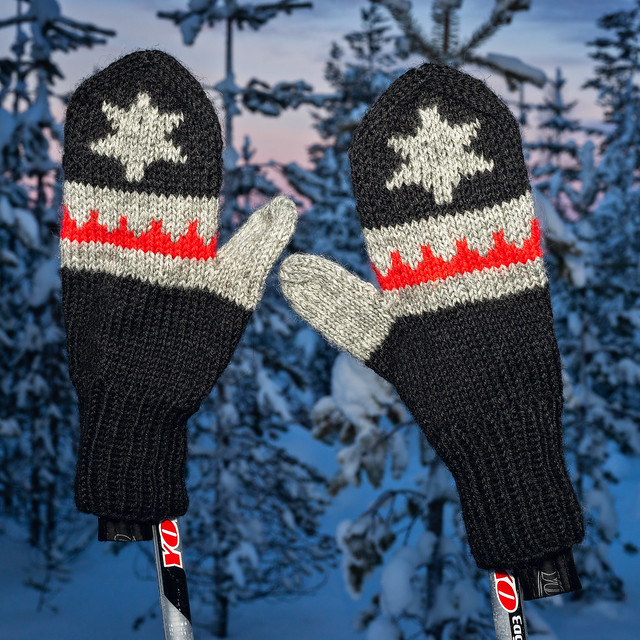 Hubby’s owl jumper is finished and I think it might be a new favourite. 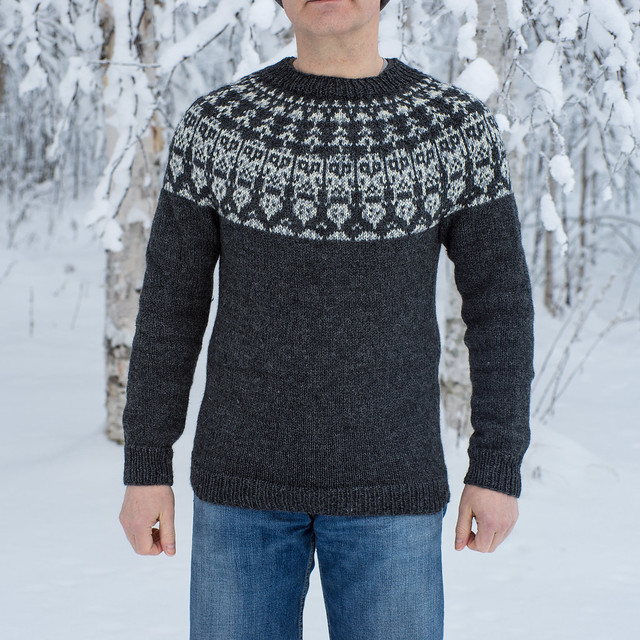 This was a very quick knit – I surprised myself. The yarn is (surprise surprise) Novita’s 7 Veljestä and it was knitted with 4mm needles. The gauge is 18 stitches to 10 cm. The pattern is here but unfortunately only in Finnish. (I will update these links if the patterns are translated into English at any time.)

I don’t really have anything else to say. This was such a pain-free and quick knit without any drama or disasters. I basically sat down and started and soon it was finished. The size is very good, too. I’m going to knit an owl jumper for me, too, but it will be more colourful. Perhaps all the different images in a different colour. The pattern for the ladies’ version is a tunic but I might do a normal length jumper instead. But not yet.

Anyway, this owl was well received, and that’s the main thing!

I finished a quick pair of mittens. 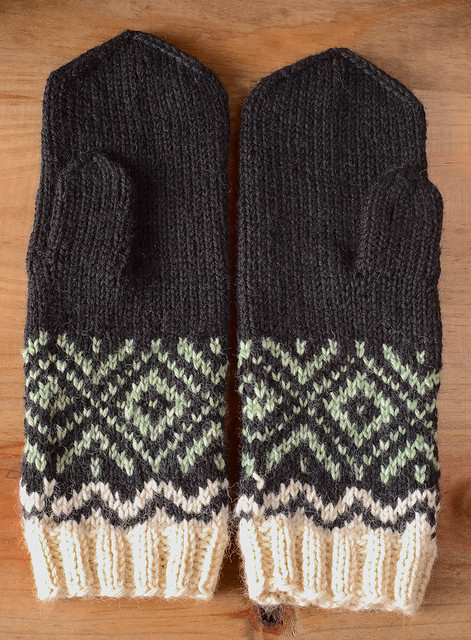 As so often, these were knitted with Novita’s 7 Veljestä (7 Brothers). It’s my go-to yarn for lots of things – mittens, socks, jumpers, you name it. This yarn is available in our local (and by local I mean 20 km away) supermarket, making it really easy to get the yarn/colour that you need. This is not something that I can do easily with many things, living out in the sticks. Of course I could order yarn online (and I do!) but those cases when I’d like to start a certain project NOW and not a few days/weeks later, a supermarket yarn aisle is handy. I always walk down the yarn aisle even when I don’t need/want anything. It has become a joke with us that I say: Let’s go and touch the yarns!

The pattern for these mittens is here. Unfortunately, it’s in Finnish. They have leg warmers in English with the same colour work, but for some reason they haven’t translated the mittens (nor the hat or socks).

So, I was complaining about the black yarn on my hoodie, and then go and knit mittens in black. Well, black yarn in general isn’t a problem, even in low light. Smooth yarn can be knitted eyes closed, mostly.