I’ve been working like a woman possessed, trying to finish off lots of stuff before Christmas and time’s running out.

This black hoodie was a pain to knit. I think it might have been ok had it been any other colour. The black yarn with its fringe (can’t think of a better word for it) made it difficult, if not almost impossible, to see where a stitch was. I would try and knit just the fringe part instead of a stitch, or if I dropped a stitch, which happened often, I couldn’t see where it went. The whole thing was just fringe and no stitches, it seemed. Bright daylight in the middle of the summer didn’t help either. That’s when I started this. Anyway, I soldiered on. 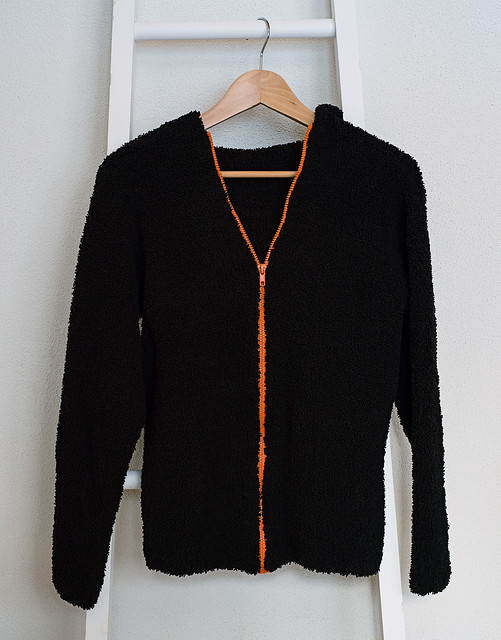 I don’t know if my description of a fringe makes any sense. The finished fabric is almost like terrycloth. The fringe is like those eyelash fancy yarns but the lashes are shorter and thicker. Think of a terrycloth and you should get the idea. The yarn is again by the Finnish Novita and it’s called Jive. I have some brighter colours of the same yarn too, which I bought in a sale once, thinking that they would be great for soft toys. No toys yet though…

I brightened up the hoodie with an orange zipper. There was no way I was going to sew anything black onto that thing. Besides, I think it looks cool with the orange zipper.

When I was a teenager, I started to wear a lot of black. I wasn’t a goth or anything but just had a lot of clothes in black. My sister always made fun of that and she said that she would knit me “a blacker than black jumper and put some black on it to brighten it up a bit”. I keep reminding her, since to this day, I’ve not received the said jumper. But at least now I have a black hoodie with an orange zipper. And orange is the new black, right?